There are plenty of great things about Lithuania but the one I love the most is wildlife. This country is lucky to have four seasons so nature watching is a little bit different every time and the amount of life that you could find in a forest here is absolutely mesmerizing. How far from Vilnius (the capital and the biggest city in Lithuania) do you have to travel to find wolves, a moose or a lynx? I was surprised by the answer myself but let me tell you the whole story from the beginning.

Biologist Karolis Keturka (you can read his nature exploration stories here) carelessly promised to introduce signs of animal activity. Theory is nothing without practice, so we planned the hike. The only request was to make it happen close to the city. Taurijos forest, located no more than 25 km (air line) from Vilnius central area, was chosen.

Sunday. Early and still dark winter morning. A little bit worried about the weather and still sleepy from yesterday I packed some food, camera and warm clothes. Well, more like all warmish clothes I have because I forgot winter jacket at parents’ place, so I had to improvise with dressing myself in 9, or so, layers (I used all sweaters and jackets of mine). Looking like a balloon, with all of my winter survival layers, I ran down the hill to the bus stop only to notice that Karolis was not there. The bus was supposed to leave in several minutes and the animal tracking guide was not here… Great. Called him, no answer.  Called again after several minutes and still no answer. My bus waiting mission was joined by two Korean guys who also were ready to hike. The bus was late and I have never been more glad about that. When the bus finally appeared on the horizon our guide was still not here and only several moments before me losing the hope he finally showed up. As we discussed later on, Karolis and the bus weren’t late after all, it is me who mixed something with timetables. Oh well, typical me. 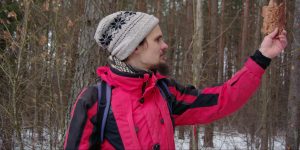 After we have reached the furthest point, where you can go with public transportation in Vilnius, and met other hike companions, we turned our shoes to the direction of Taurija forest. I was amazed to see that 18 hikers decided to join us on this early morning for the walk.

The snow condition was troubling, in Vilnius there was no snow left and that is not quite handy for animal tracking in general but once we entered forest we were nicely surprised by the fresh powder. 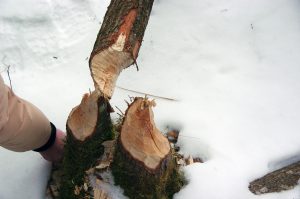 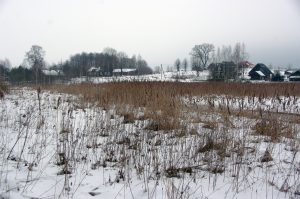 As we left the urban area and entered the forest, the first thing we did see was footprints of a domestic cat, then a fox, jackrabbits and other small animals followed as well. It still was fairly close to Mickūnai village but forest was full of wild life. During the first hour of a hike we have already seen more footprints than expected and it was one tenth, if not less, of the distance that we planned to cover.

The beginning of this hike looked promising and we went up north following Vilnia river, frequently stopping to discuss and observe not only footprints but also droppings or chewed wood. I was amazed about the amount of wildlife signs. Usually while hiking I tend not to notice the signs of animal world activities (such a shame, to be honest) and on a hike with professional nature detective we were shown tracks every 200 meters. So our progress was slow but steady, we analysed and learned about animal behaviour, lifestyle and most interestingly why would they poop on a forest road. I have never seen so many people being that genuinely interested in a poo of a marten. Oh, you would be surprised how many stories one simple excrement can have! 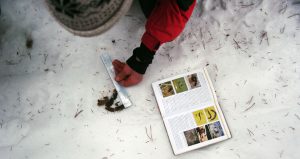 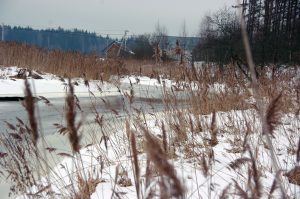 We expected to find cute beaver tracks close to the river but all we saw was an eaten tree and excrement of an otter. At some point we had to cross the river and follow our plan to the northern parts of the forest. Karolis heard rumours that on these parts lynxes are to be found and we expected to see their tracks. Happy with our morning findings we turned straight to the bridge with only several short stops. After crossing the river the forest changed into a swampy area. It was almost lunch time and my belly was asking for food. While looking for a break spot one of us noticed footprints of a quite huge animal that we haven’t seen before. Karolis and his  book of animal tracks confirmed – lynx was here not so long ago! All excited and happy we stopped for a quick lunch close to our lucky forest cat spot. 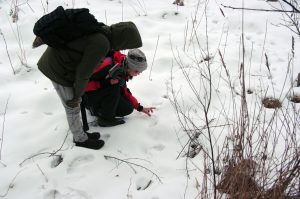 Imagining fluffy lynxes and dreaming about other animals that we haven’t seen yet the company continued in a frozen swamp. As one of the hikers noticed, the forest and the swamp are absolutely amazing in chains of ice because there are no mosquitos and usually wet ground is frozen making it easy to walk through it. The area took our breath away. The massive trees are fallen down showing off their huge roots and smaller trees tangled to each other creating a maze for us to solve. Just wow. 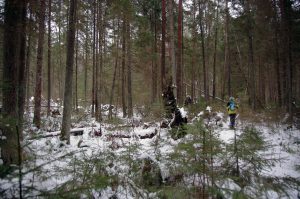 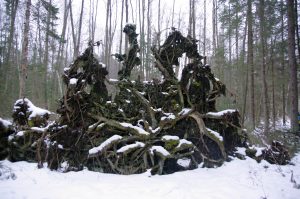 Karolis and I fell in love with this forest, others as well, I believe. We made a promise to come here again (and Karolis came back the very next weekend) with tents and better photo equipment to snap more pictures of this piece of heaven.

Soon swamps were changed by inland dunes and airy pine forest. Following moose prints in the moss and snow we reached a beaver dam. I got delighted about seeing beaver footprints but I guess this day wasn’t a good one for beaver lovers because we haven’t seen any here too. But it didn’t stop us from exploring the surroundings and learning something about how beavers live, why they build dams and why sometimes they don’t. 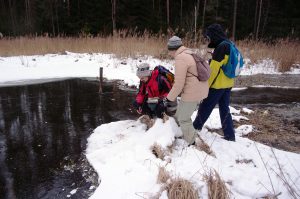 The path led us back to the civilization but it still had some distance till the train station in Bezdonys village. Following the channel we enjoyed wet feet and wild berries. By the water we found fresh lynx footprints leading to the same direction we had to go. Sharing the path with the cat we imagined it watching us silently from the tops of the trees as we passed. On our way back we also saw a wolf and a boar tracks and even seen several of them running somewhere in the horizon. The last light and the last tracks were left behind our backs as we hurried to a train.

The timing of the grand finale was more than perfect, we have reached village 15 mins before the train and only then we realised that we hiked 31 km in trails and swamps. We had time to calculate what we have seen in the forest and it impressed us all – 17 different species! Some left with a train, others hiked another 6 km till the bus station, goodbyes were warm and with a hope of meeting again. 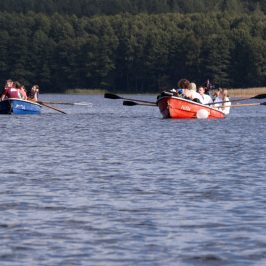 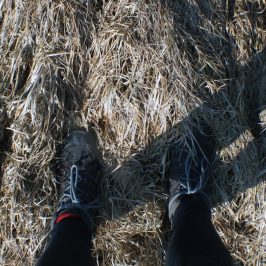 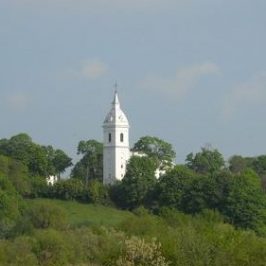